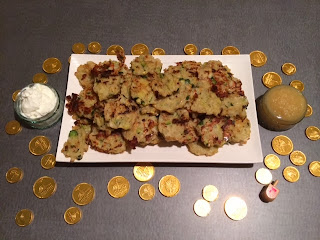 Janna's Hanukkah Zucchini Latkes made with the Vitamix

Potato Latkes
Even though my grandmother swore by red potatoes. I prefer a starchier potato like an Idaho in this recipe. Serve the pancakes plain or with applesauce.

Set oven racks at middle and lower positions; preheat oven to 400 degrees F. Prepare 2 baking sheets by brushing each one with 1 tsp. of the oil.

Using the Vitamix, begin the shredding process. Remember that it works best in stages. I used the large pyrex glass bowl to combine all the ingredients as I went. First, I sliced the zucchini into 3 pieces and shredded them, dumping the shredded ingredient into the bowl after each piece was complete. Then I peeled the skin off the onion, sliced it in half and shredded each onion half. Finally came the potatoes. I first peeled all 4 of the medium sized Idaho potatoes. Then I sliced each potatoe in half and after trial and error realized each potatoe half needed to be cut again in half in order for the Vitamix to successfully shred. Combine all of these ingredients into a large mixing bowl. Next add the flour, and salt; toss with 2 forks to mix well or use a spatchula. Add the eggs, and the remaining 1 tsp. oil; toss to mix.

Drop rounded tablespoonfuls of the potato mixture onto the prepared baking sheets and press lightly to form cakes. If your mixture gets too much liquid you can place the tablespoonful into your hands to squeeze the excess liquid before placing it onto the baking sheet.

Transfer to a platter, arranging the latkes browned-side up, and serve. Though I enjoy browned on both sides so I cook them for longer...(Latkes may be prepared ahead and stored, covered, in the refrigerator overnight. Reheat at 350 degrees for 10 minutes.)

About 35 calories per latke: 1 G protein, 1 G fat, 6 G carbohydrate, 95 MG sodium, 9 MG cholesterol for a basic recipe without the zucchini and extra egg...add in the slightly higher cholesterol (replace it with egg whites if you are wanting to be mindful) and the additional fiber you get with the zucchini...

Notes from Janna about the recipe:

Before you put the latke on the baking sheet make sure that all the ingredients have been thoroughly mixed. The mixture is better if there is not much juice or liquid; this should be dealt with before forming the cakes. All the ingredients create a juice, especially after they have sat in the bowl while you add everything. To deal with this: either take an old sheet, a cloth or many paper towels works, and proceed to place it over the top of the bowl with the mixture. Then press firmly soaking up the liquid. Then retoss the mixture and do it again. Proceed until you think you have gotten the majority of the liquid away. This will help the cakes stick together better and be easier to form.

Motts applesauce goes excellently if you don’t feel up to making fresh homemade sauce. I think latkes need the applesauce. Some people also like sour cream as well. This is not as healthy or appealing in my opinion. I love using greek yogurt as a substitute for sour cream. 0% Fage Greek Non-Fat is delicious and nutritious.

You can also jazz up the recipe adding things you might like: for example, spinach, parsnips, carrots, or other vegetables. This creates a fun mixture. I just happen to love zucchini...

Fun thing you can do with the kids if they want to help: use food coloring to turn the latkes into their favorite color. I still remember the year I got to make purple latkes…

By baking these latkes it is healthier than frying them but since you still use some oil you are being true to the spirit of the Holiday.

Happy Hanukkah! And remember, latkes are like potatoe pancakes and they could totally be made year-round if you love potatoes as our household does :-)

Express your spirit to embody wellness!

1. Express or give a tangible or visible form to (an idea, quality, or feeling).

2. Provide (a spirit) with a physical form.

Embodily
As a dynamic health and wellness professional I bring certified expertise and passion to my work as an exercise physiologist, wellness coach, personal trainer and educator. I am a strong organizer, innovator and team player. I have the credentials, skills and enthusiasm to motivate and guide people of all abilities to achieve their health and fitness goals. I have been told my enthusiasm for wellness is contagious, as I am an advocate for making wellness approachable for everyone. I received my M.A. from Teachers College of Columbia University, in the Department of Biobehavioral Sciences, Program in Movement Science, Specialization in Applied Exercise Physiology. I've been dancing since I was 3 years old and love learning about new forms of movement! I'm a Zumba Instructor, a PiYo Instructor, Barre Instructor, a certified Personal Trainer through ACSM and Exercise is Medicine credential level I. I am a certified Wellness Coach through the Mayo Clinic. I am a National Board Certified Health & Wellness Coach. I am a Certified Kundalini Yoga Teacher Training with Wanderlust Hollywood and KRI (220 HR Yoga Alliance, Kundalini Yoga as taught by Yogi Bhajan®).